Beekeeping has grown into a significant agricultural practice, generating millions of dollars in revenue each year through the sale of honey and other bee products. Beekeepers, on the other hand, must deal with illnesses. Terramycin aids beekeepers in the control of one of the most serious honey bee illnesses, American foulbrood (AFB). This article will walk you through the process of using Terramycin powder to help bees cope with sickness in the beehive.

What is the American Foulbrood Disease?

The American Foulbrood Disease (AFB) is one of the most devastating honey bee illnesses. Paenibacillus larvae, a spore-forming bacterium, cause this problem. When honey bee larvae ingest the spores, they become sick. This pathogen will germinate in the intestine and quickly spread to other tissues. The sickness can affect the majority of the brood, severely weakening and eventually killing the colony.

Fortunately, antibiotics based on the chemical can prevent and control American Foulbrood disease. Terramycin, made by Pfizer™ and contains the active component Oxytetracycline HCl, is one of the antibiotic products at the forefront. When used in the specified quantities and frequencies for the affected honey bee colony, the medicine can control American foulbrood.

Terramycin inhibits the spread of American Foulbrood disease in beehives. It stops the vegetative form of Paenibacillus larvae from growing in the beehive. However, it has no influence on the viability of the bacterium’s spores. Terramycin is available in several formulations, including TM25, TM50, and TM100. They are approved for the treatment of Foulbrood Disease of America. You can purchase any of these formulations from drug stores with the approval of a qualified veterinarian. Both beginner and experience beekeepers can use Terramycin to control American foulbrood disease in their apiaries. 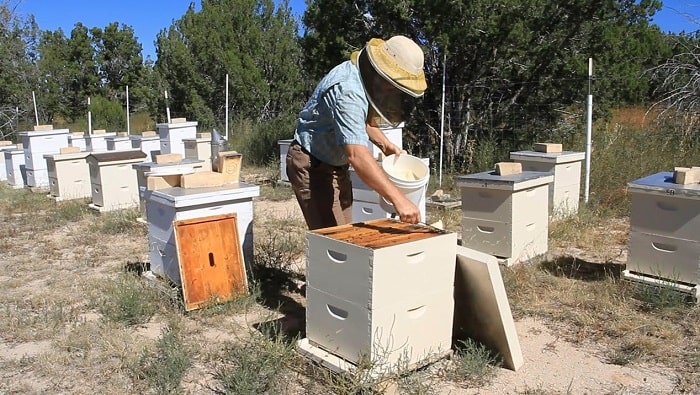 Terramycin does for Honey Bees

Water is soluble in some Terramycin formulations. As a result, it can be fed directly to bees in the form of a syrup mixture containing the appropriate amount of the active ingredient. TM25 is easily soluble in water and can be fed directly to honey bees by mixing it into supplemental sugar syrup and feeding it to the bees as directed by the manufacturer. 267 milligrams per ounce of solution is safe to use.

After preparing the mixture, it should be mass fed using feeder pails, division board feeders, or by filling the combs. To avoid contamination of production honey, the drug/syrup mixture should be fed in the spring or fall and digested by the bees before the major honey flow begins. In all circumstances, it should stop at least six weeks before the honey flow begins.

You can combine Terramycin TM25 and TM50 formulations with confectioner’s sugar to create a dusty mix. Of the three uses, a dosage of 267 milligrams is the active ingredient per ounce combined. The application should be completed every four to five days. To get a dust combination containing approximately 267 milligrams of the active ingredient, combine one whole 6.4 oz. box with 2 pounds of ground sugar for TM25. For the TM50 formulation, combine three ounces of the formulation with two pounds of confectioner’s sugar.

To avoid dropping dust into the brood cluster, place the dust mixture towards the outer margins of the frames. Uncapped brood cells should not be dusted as this could cause them to die. There have been reports of larvae dying after coming into contact with Terramycin dust.

By combining short botanicals like Crisco, sugar and Terramycin you can create formulations for extender patties. Oxytetracycline (4 ounces) combined with 165 grams of vegetable fat and 330 grams of sugar. When ready, you should place the patties at a rate of one piece per flock on the top bars of the parent bird’s nest frame.

It is critical to get the patty recipe right. Because huge patties are rarely consumed completely, this could result in under-treatment. As a result, the disease-causing Paenibacillus larvae may become resistant to Terramycin.

It is frequently difficult to achieve the proper blend of HCL-280 and sugar. To prevent many potential bugs and challenges, you can use a ready-to-use preparation, such as Terra-pro. It includes Terramycin, Bee-Pro, sucrose, and other vitamins and minerals. Here is a ready-to-use formula. However, you should only purchase Terra-Pro with a Veterinary Food Directive (VFD) note from a certified veterinarian. Every Terra-Pro package includes a measuring spoon, which adds to the user’s simplicity and convenience.

You should supply Terra-Pro early in the spring and late in the fall. The bees should consume it before the main honey flow begins. For spring treatment, spread 200 milligrams of Terra-Pro across the borders and ends of the brood frames and top bars of the brood chamber. During the fall, you should use two full Terra-Pro measuring spoons for the entire inner shell of the hive. You should also follow in both spring and fall after three applications at four or five day intervals.

Terramycin, like all antibiotics, is regulated by the Food and Drug Administration (FDA) and the states. Therefore, when using them, you should follow the procedure and dosage. There is evidence of a Paenibacillus larval strain resistant to Oxytetracycline Hcl.

Another issue that may occur is the presence of chemical residuals in honey. As a result, beekeepers must ensure that they stop at least six weeks before starting the main stream when using any of these methods. Honey from colonies treated with Terramycin is not intended for human consumption.

Terramycin is an effective antibiotic for controlling American foulbrood disease in any of its applications. However, due to the impact of misuse, you should not use it indiscriminately. As a result, beekeepers should get professional guidance from veterinarians before using the medicine.