The beekeeping sector has progressed significantly. Designs for beehives have been devised and reinvented. Not long ago, no one dreamed you could raise bees on your rooftop, let alone in your city apartment house. All of this is possible. Mason jar beekeeping is one of the most recent innovations in beekeeping. So, what is beehive in a jar?

What is mason jar beekeeping?

Mason jar beekeeping, as the name implies, is the practice of keeping bees in Mason jars. The Mason jars are put into a standard hive, where the bees will use the Mason jars instead of hive frames to make combs and honey.

The honey jars are removed from the hive once they have been filled with honey. The bees may take some time to figure out how to use the jars. However, if they get it perfect, the bees will find it much easier to build their combs within the Mason jars. Mason jar beekeeping is a do-it-yourself activity that anyone with some wood, bees, and jars can do.

How to begin Mason jar beekeeping?

Mason jar beekeeping is the practice of mixing Mason jars with an existing hive. The jars are put on top of the hive box supers. One of the most basic Mason jar hive ideas is a combination of a square pine board. A borer is then used to drill evenly spaced holes large enough to fit 6 to 8 Mason jars. In this hive design, the excluder is not necessary. Most typical hives are tall enough to fit the Mason jars.

The first several weeks of setting up the Mason jars may be the most difficult and discouraging. The bees may appear to ignore the jars for a while, and they may not begin to construct wax and combs on the jars for some time. Later on, though, they would start by putting wax on the edges of the jars and then building the combs up.

At this time, you should avoid raising the board or jars. Most of the time, the bees will concentrate on the hive frames before going on to the jars. That implies it’ll be a long before they start making combs in the jars. However, you should remove the jars before the bees store too much honey in them. Because there is just a little amount of room to create the combs, it may not take long to fill the jars.

The benefits of mason jar beekeeping

Here are the benefits to help you quickly implement this plan right away:

The drawbacks of mason jar beekeeping

Mason jar beekeeping, like any other kind of beekeeping, has its problems. Among these difficulties are the following: 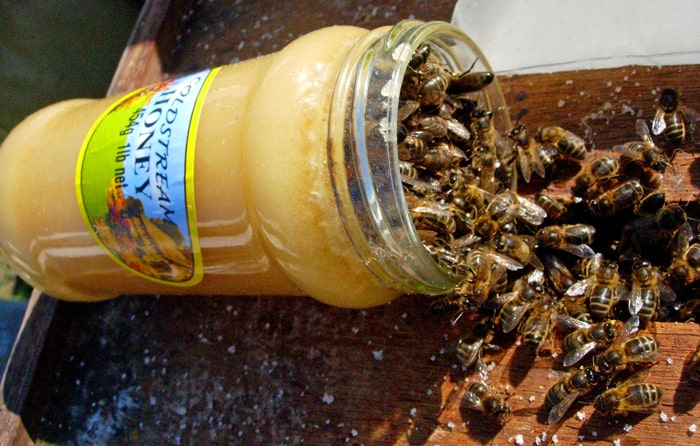 The collection of honey and comb from the Mason jar beehive differs from that of other beehives.

Remove the comb that is around and between the Mason jars so that you can easily pull them off the beehive’s wooden board. Remove the Mason jars one by one after you’re certain they will come off easily. Place the jars with pulled comb and stored honey in a container, such as a basket or bucket.

Check the Mason jars for integrity after removing them from the beehive. Cracks in the bottle are a vulnerability that allows air into the jar and causes honey to ferment. Pieces of shattered glass from Mason jars may be present in the honey and cause you harm if you ingest it.

The Mason jars gathered contain drawn comb and honey kept in the comb. Uncap the comb once it is visible by putting a sharp knife into the Mason jar. A fork or other clean and food-safe object can be used instead. In these beehives, bees construct comb in mason jars while the jars are turned upside down. The honey flows easily out of the cells after they are uncapped and placed right side up.

You like to taste comb honey every now and again. Honey is forced out of its cells into your mouth by chewing. This way of using Mason jar comb and honey is entertaining. It is a healthy way to consume honey. It may, however, become a mess if not properly controlled.

You may do it the old-fashioned way: smash the comb and honey in the Mason jar. The resultant honey and wax comb combination is then poured over a collecting container. This is an old way of extracting honey. It produces pure honey but takes time. If you are in a hurry, you can not utilize it since it is not a quick way to get to the honey and comb in the Mason jar.

If you have been thinking about starting a beekeeping business that maximizes production per square foot, you might consider utilizing a Mason jar beehive. It complements the traditional hive and is simple to design and construct.

>>> View more: The Best Flowers For Bees – Things You Should Know