Honeybee colonies can die off from time to time. This can include many factors such as weather, disease, as well as chemical pesticides. When a colony is completely dead, beekeepers usually clean them up and prepare them for the next use. Today, we will go through how to clean a deceased beehive frame and reusing bee hive frames for a new colony of honeybees.

Why do colonies fail?

Mites are now a major parasite that beekeepers must cope with. Mites connect to bees and feed by biting into the bee and sucking on the bee’s bodily secretions. Controlling mites is greatly aided by fogging, pouring, and vaporizing oil into the beehive. Furthermore, spraying honeybees with sugar syrup or dusting them with powder causes bees to groom, which can result in the bees removing mites from their bodies.

Winter is a difficult season for honeybees. Honeybees die more during the winter and consume stored honey. Beekeepers who are wintering honeybees should ensure that their beehives do not allow cold air in. Wintering bees should have access to food in the form of honey.

The most common reasons for beehive extinction are diseases and insecticides. A sickness that sweeps through can wipe out the entire colony in a matter of days to a week. Chalk brood, foul brood, and nosema are three common illnesses that cause honeybee colonies to die. Pesticides sprayed around or in the beehive, where many bees come into touch, are also harmful. A chemical can spread throughout the beehive and affect the brood as well. 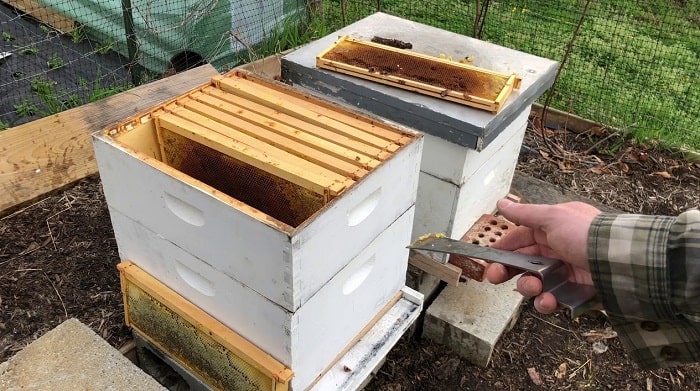 Cleaning a dead beehive after pesticides, herbicides and insecticides

When bees die from chemical preparations, it is important to keep the chemicals from coming into contact with honey bees again. You should clean or remove them from the hive when the surfaces have been exposed to pesticides. In some cases, the use of chemical preparations is required. However, you should do this method with caution. You should also consider removing the honeybees from the beehive for a day or two to reduce the concentration of pesticides. If you close the honeybee hive, make sure they have enough honey stored or feed them.

When cleaning the beehive frames after wax moths, the beekeeper must also remove all the damaged honeycombs and the foundation on the frame. You will then bleach that frame before being reused in the hive. You can clean the beehive frame by disassembling it. Furthermore, you can freeze the frame for two days. Any larvae, eggs or caterpillars that may have been in the frame will die from the frigid temperatures.

You should clean all the components of the hive, including the motherboard and bottom cover. Feeders and pollen traps that were in the hive when the wax moths attacked should also be cleaned. This prevents re-infestation of the beehive from eggs laid in the beehive by adult wax moths. For the best results in killing wax moth eggs, disassemble the beehive.

How to remove dead bees from comb

Lightly strike the frame on an empty beehive box to remove bees from comb. Not all bees can be removed in this manner, but the majority of them will. Take care not to use too much force, as this will ruin the comb. If you hit the frame too hard, the honeycomb will break off.

You can also try blowing dead bees out of the comb. Begin with the jet from a distance and work your way closer to the comb. When extracting bees, set the air compressor at high pressure to avoid injuring the honeycomb.

If you put a comb in a beehive, the local bees will clean it out. Honeybees are fastidious cleaners, removing deceased bees from the hive. They drag them out and may transport the dead bees away from the colony. You should only do this if your hive is not at risk of contracting disease or passing the parasite on to another colony of honey bees.

In extreme circumstances, honeycomb is chopped and melted from beehive frames. It frees up the frame, allowing you to reuse it. You may filter dead bees from hot wax and utilize the wax to produce items. 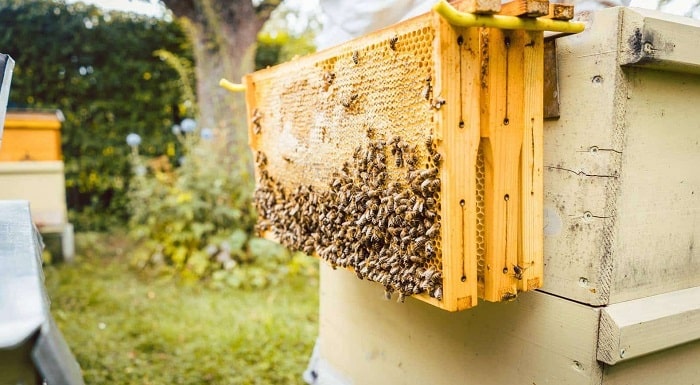 How to reuse a dead beehive

Reusing beehives saves beekeepers money on new beehives and beehive components. When done correctly, reusing a beehive is simple and safe. Bee-harming organisms’ eggs, larvae, and spores must be removed.

Charring beehives and beehive parts using a blowtorch is an excellent method of cleaning beehives. Fire successfully eliminates organisms in the beehive. You might also try pouring gasoline or another flammable substance onto the inside surfaces of the beehive and lighting it up. The flammable liquid ignites and then dissipates. To prepare the beehive for the next honeybee colony, sand away the ash left behind.

Honeycombs that have been in a beehive for an extended period of time should be removed. Because it absorbs pesticide chemicals, which can harm honeybees. The drawback of old wax is that it attracts wax moths and, on occasion, hive beetles. Remove the old dark comb from the frames and either melt it or use it to produce wax goods. After washing, you can reuse the frames in the hive.

You can bleach old dark wax by exposing it to the sun. Put it out in the sun on a sheet of tin or in a solar wax melter to achieve this. The sun gradually bleaches the wax to a white tint. The container should be angled down so that melted wax flows down to a collecting container.

Beekeepers can reuse the entire hive or pieces of it after cleaning. You should also replace damaged components of the hive. It is generally advisable to disassemble the hive and use only undamaged parts for additional hive repair. You can reuse the hive frame from the dead hive in another hive or burn. You can also use beeswax as a base or reuse it to paint combs on other honeycomb frames.

How to prevent beehives from dying?

In beekeeping, you can use oil to deter pests like ticks and honeycomb bugs. Beekeepers use oils in a variety of ways, including dripping, evaporating, and fogging. These oils are largely natural and do not linger in the hives after application.

When utilized appropriately, traps are incredibly successful at pest control. Use hive beetle and wax moth traps to keep the pests under control.

Pests, parasites, and illnesses can all decimate a honeybee colony. On the other hand, beekeepers can successfully revive a dead hive in a tank. The first step in reusing a dead beehive is to clean it. To recapture any lost beehives in your apiary, use this article on how to clean a dead beehive.

>>> Read more: How To Save Bees – Everything You Should Do