Nobody wants beetles in their home, not even your honey bees. A hive beetle infestation can be devastating to your colony. It is critical to keep your colony healthy so that it can fend off these and other pests or diseases that endanger the hive. So, how to get rid of hive beetles within your bee hive?

What are small hive beetles?

The small hive beetle is a beekeeping pest native to Sub-Saharan Africa. In a beehive, the little hive bug can be highly destructive. It wreaks havoc on combs, pollen, stored honey, and bee larvae. Its larvae crawl into the comb, consuming and defecating on the honey. As a result, the honey ferments and discolors.

Small hive beetles are dark brown or black in hue as adults. They are approximately 5 mm long and can live for up to 6 months. Small hive beetles can have 4 to 5 generations in your beehive during the warmer seasons.

What are large hive beetles?

Large hive insect damage in a beehive is produced by adult beetles feeding on honeybee broods. When adults are in a beehive, they have a great predilection for the brood. This ravenous feeding activity leads to the rapid loss of combs in the beehive and the rapid extinction of your honeybee colony.

What are the effects of hive beetles on the beehive?

Hive beetles generate a variety of issues in a beehive. They make the beehive not very conducive for your honeybee colony.

Hive beetles will colonize your hives and make themselves at home. They will begin laying eggs almost immediately.

These pests quickly take over the hive, and once they do, they, of course, require food to survive. It can also weaken your beehive as a whole, prompting the queen to leave. She may take the remainder of the bees with her, resulting in a swarm and the loss of your bees for good.

Unfortunately, hive beetles enjoy honey as much as we do. Honeycomb is a favorite food of both adult and larval hive beetles. In contrast to other bee pests such as wax moths, hive beetles do not completely destroy the honey. They do, however, consume all the honey, depriving the bees of their food source.

Furthermore, hive beetles are reported to defecate inside the hive. This causes the honey to ferment, rendering it unsuitable for harvesting. It also gives it an unpleasant odor. 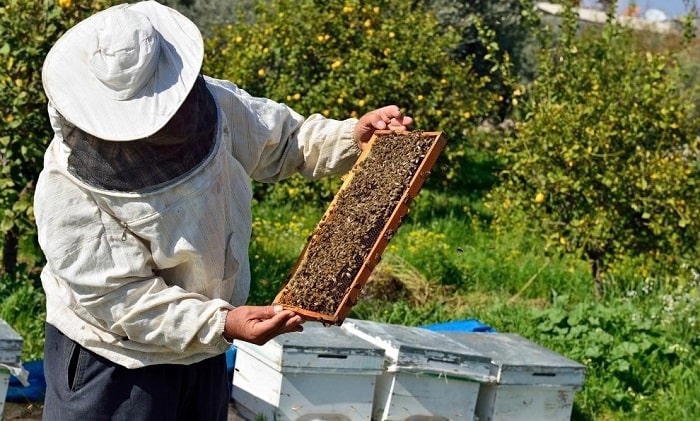 How to get rid of small hive beetles?

It is the most effective drug available for beekeepers to control the small beetles inside the hive. You should not use it when you are harvesting honey from the beehive. Beekeepers should remove honeycombs from the hive for the 42-45 days required to successfully apply this method. Beekeepers are advised not to use the treatment more than twice in the same beehive in the same year.

Before using this solution, make sure there is no vegetation on the ground. This permits the treatment to come into direct touch with the soil and permeate into it. In addition, instead of a sprayer, use a sprinkler to apply the chemical. It enables you to apply permethrin without fear of the chemical contacting the hive surface and injuring the bees. Apply these treatments in the evening, after the bees have settled down for the night.

This is also the method used to prevent small bugs. You should fully dust the items within an 8-10 foot radius around each hive prior to application. Watering the ground after dusting to allow the water to seep into the soil. You can also plan to dust the ground just before it rains. Diatomaceous earth kills the larvae and pupae of ground-dwelling beetles.

How to get rid of small hive beetle larvae?

Small hive beetle larvae like to congregate on beehive frames and in corners within the beehive. They also gravitate toward light as they age. This is because they desire to leave the beehive and pupate on the ground.

Beekeepers employ these two traits to eradicate little hive beetle larvae. It enables you to save beehive frames and reuse them in the beehive.

A light source near the floor or entrance of your beehive draws a small hive beetle. The larvae are then swept up around the light and drowned in water laced with soap.

Allowing your hens to nibble around your beehives is an excellent technique to keep little hive bug larvae at bay if you already have them.

Bees are usually not a concern for chickens. Chickens just like pecking and eating the larvae they find on the ground. They may also dig up the soil, exposing the larvae to sunlight, which might cause them to dry up.

Third, remove the infested frames from your beehives and freeze them. The recommended freezing time for small hive beetle larvae removal is four days. This kills all the larvae in the frames, and you can then wash them away. 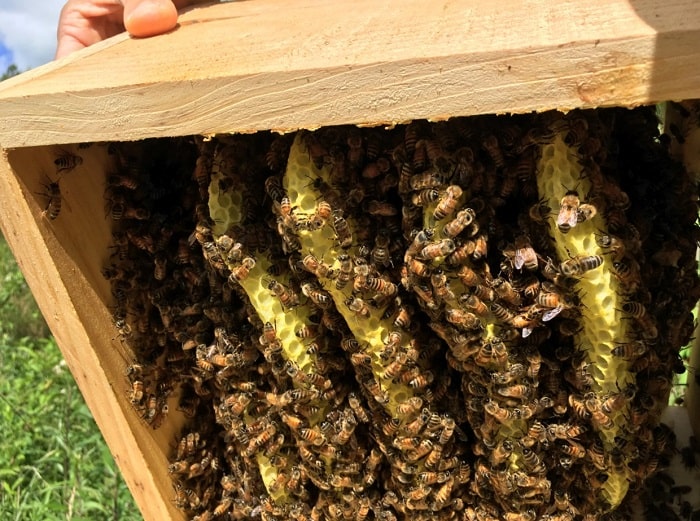 Natural way to get rid of hive beetles.

Controlling small hive beetles is possible using organic treatments. These include everything from traps to home-made mixes. Essential oils and vegetable oil are used in small hive beetle control mixes. Mineral oil is used to kill beetles in traps.

Diatomaceous Earth is another organic therapy for hive bugs. Hydrated lime replaces the vegetable oils used in traps in an natural treatment for hive beetles. Because, the kill ratio of lime is higher than that of oil. It also spreads uniformly, unlike oil, which may collect in the lower areas of traps and leave other areas dry.

In addition to direct control strategies, beekeepers should include preventive measures in their apiary pest management plans. These include cleaning the beehive, ensuring that all beehive parts are in good working order, and exposing the beehives to sunshine. You can give shade to your beehives during the hottest part of the day.

Preventing pests is preferable to coping with their impact and counteracting their impact on honeybee colonies. Use these precise strategies for getting rid of hive beetles to spare your bees from a hive beetle infestation and its severe consequences.