Bees do a plethora of other activities that keep us bees enthralled by their presence. We, on the other hand, despise the same spirit in other six-legged species, in this case, ants. Because ants are opportunists, they will take advantage of a weakened colony in a beehive. They are similar to wax moths in this regard. When you find ants in a beehive, it is usually a sign of a larger problem that could endanger your colonies. So, how to keep ants away from honey?

What should you know about ants?

In fact, when certain kinds of ants create colonies and come into contact with honey bees. They might fight to the death and severely injure, if not kill, a beehive. Ants occur in a variety of colors and sizes, and in most circumstances, they would just be a small annoyance to a beekeeper. In general, a strong colony can guard the beehive from ants.

Unfortunately, ants can be more than a little annoying at times, so your young ladies may require your assistance with this one. When you detect ants in or around a hive, here’s what you can do to help your bees.

Ants are the obnoxious neighbors who become all too familiar. You let them borrow a screwdriver one day, and the next day they have moved in, emptied the pantry. The majority of the ant species in the area are like this. They enter when the hive’s defenses are weak. They adore honey and will consume bee larvae as a high-protein food.

This is extremely difficult for them to do if the colony is active. This implies that if you open the hive and find it overrun with ants, it usually means the bees were not doing so well in the first place.

So, do ants wreak havoc on beehives? They do, indeed. The hive itself may be unharmed, but the colony will suffer greatly. A raid on their honey reduces their ability to survive the winter. If the colony was already struggling, they would frequently cut their losses and flee. 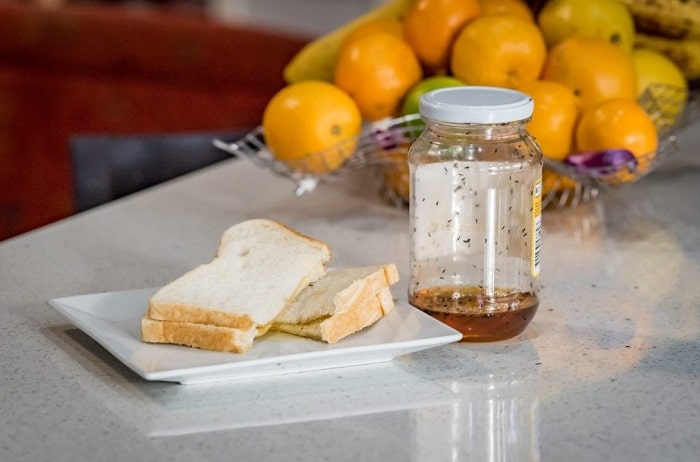 What to do if you have ants in your beehive?

Ants like to build their nests between the inner cover and the telescoping cover, according to several beekeepers. It’s warm, dark, and reasonably close to a sugar syrup or honey source. If they have already made themselves at home in that area, the simplest thing to do is scrape them away and follow their trail. Cut them off once you have determined their access point.

The issue with dealing with ants in the hive is that they are biologically extremely similar to bees. Poisoning them would contaminate the bees. If the bees are still in the hive, mechanical removal is your only choice. Because ants are significantly smaller, this can be difficult. It is more effective to keep them out in the first place.

The good news is that ants rely largely on their pheromone trail. If they deviate from this path, they get disoriented and unsure of where to go. They are said to be army ants, fully blind and reliant on the pheromones left by the ants in front of them.

Is it possible to kill ants without killing bees?

This depends on the approach you use. For example, you can drown the ants without harming the bees. On the other hand, chemical warfare would be counterproductive. Ants and bees are members of the same taxonomic order, Membrane. So what would chemically kill an ant will most likely have the same effect on bees.

When deciding what deterrents to employ ants in your hive, keep the least amount of harm to your bees in mind. Newer moats have a cover to keep curious bees from drowning, but the gap between the lid and the moat is too wide for ants to cross.

How to get rid of ants?

Beekeepers are like old wives’ tales. We have so many, but many of them are true. Here are some ideas and methods you may use to discourage and keep ants out of your beehive.

This appears to be a favorite with beekeepers. It has worked well and is quite simple to deploy. All you need are four wide containers large enough to fit your hive legs while providing adequate space between the leg and the container’s edge.

What should you put in the moat? Although water is a nice concept, it can also work as a bridge, since ants can utilize surface tension to move around. It is preferable to use soapy water. Some folks apply vegetable oil while others use motor oil. Used motor oil is significantly less expensive, but vegetable oil is better for the environment if it rains and the container overflows.

Instead of using a moat to keep bees away from your hives, you may paint the supporting beam/leg of the hive stand with cheap motor oil, such as this brand. That is generally enough to keep the ants at bay. However, because your hive stand is exposed to the outdoors, it will require a touch-up every few months. 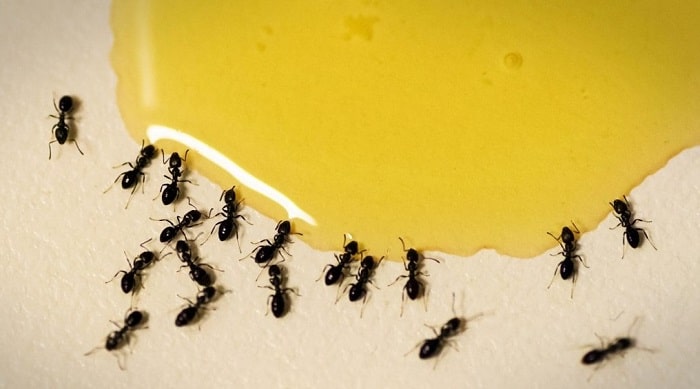 We’re not sure why this works, but it appears to keep ants away from the hive while having no effect on the bees. Aside from some heavy sneezing, being around cinnamon is also relatively safe for you, and it is incredibly simple to purchase and use.

You must, however, use ground cinnamon. Cinnamon sticks do not appear to be extremely helpful, most likely because ants may easily get around them. Ground cinnamon is much easier to disperse and much more difficult for ants to work around.

Bees love weeds and diverse natural grasses. Ants, on the other hand, can use them as ladders to access your hive even if you lift it off the ground. This works best when combined with other techniques, such as employing moats. To prevent vegetation, you might cover the area directly under and surrounding the hive with gravel.

Sugar syrup and loose combs act as a siren song for ants and other pests. Spills, in fact, are renowned for encouraging robbing behavior. Always have a container with you while visiting the hive to inspect it. If you are going to feed your bees syrup, make sure to keep spills to a minimum.

What you spill, you must clean up, or else the unfriendly neighbors will come, eat it, and break in asking for more. Any burr comb in the hive should also be removed and placed in the bucket. Do not give the ants any extra incentive to come knocking.

Ants, like humans, are captives to friction. They can not move if there is no friction. Some individuals use Vaseline, while others put grease on the hive stand. Others may wrap it in cling film and apply lubricant to the surface.

The key, like with other problems, is early detection. Because ants are much smaller than bees, when a strong colony is confronted with a building ant trail, the sly intruders can be thrown out.

Do not let ants around your beehive depress you. Combating the threat is simple, especially if you are proactive. Ants have vanished. May you triumph in your battle against ants in your beehive.