The honey bee appears to be prey to practically any predator. Other countries, such as Japan and France, are not unfamiliar with Asian giant hornets. The “killer” insect mostly attacks honey bees and other native pollinators. Asian giant hornets represent a severe threat to the United States’ dwindling bee population, and scientists have expressed their concerns. It is also concerning because it may spread to neighboring states. So, how to protect honey bees from hornets?

How Asian hornets were introduced into the United States

Nobody knows how the Asian hornets got to the United States. Scientists believe they may have arrived in the United States via international freight. The insect, also known as Vespa mandarins or Japanese giant hornet, is the world’s largest hornet. They love moderate and tropical climates, which is why they are found in South Asia, the Russian Far East, East Asia, and Mainland Southeast Asia. They prefer low-altitude mountains and forests and avoid plains and high-altitude areas. 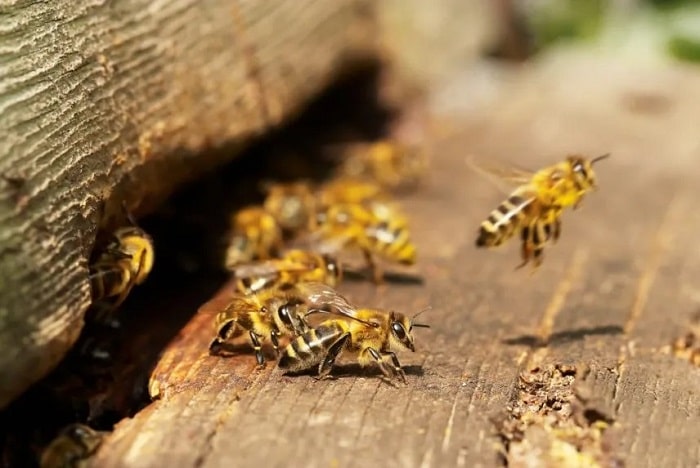 Asian gigantic hornets are easily identified. They feature black and orange patterns and longer characteristic stingers than normal. The Asian gigantic hornet resembles the Asian hornet, but they are not the same. The latter has legs that are yellow. The head of the enormous hornet is light orange, with a bright orange base. It also has a black digging tooth, a dark brown thorax, and darker forelegs.

They are a type of social wasp that live in colonies. Their colony, like that of honey bees, is made up of a queen and many workers who perform comparable functions. The workers are in charge of feeding the colony and will travel long distances in quest of food. Many types of insects, with a preference for honey bees, are the primary food sources for Asian giant hornets. They appear to have an obsessive need for honey bees. They also consume tree sap and honey from bees.

Hornets build their nests by building or occupying pre-existing tunnels, particularly those excavated by rodents. They might even live in decaying pine roots. The Asian giant hornets are at their most threatening in the late summer and early fall. This is the time of year when the workers are busy stockpiling protein feed for their young Queens in preparation for the next year.

Asian giant hornets appear to be well-trained intruders. Their predation strategy is mind-boggling. The hornet workers are responsible for the colony’s food hunting. They will travel long distances in quest of food for their queen and young. They mostly seek out insects of all kinds, with a clear preference for honey bees. The hunt begins when a honey bee swarm is spotted.

A single scout is usually in charge of the hunt. These will approach a hive with caution and create pheromones that will direct their nest mates to the location of the hive. The workers will then launch an assault. The hornets will use their massive mandibles to decapitate the honey bee guardians’ heads. They will next continue to the colony’s interior. They travel in small groups, and only a few of them can wipe out an entire honey bee colony.

Because Asian giant hornets attack humans, they are extremely deadly. Their quarter-inch-long stingers cannot be stopped by any protective clothing, even beekeeping costumes. It pierces quickly. And its venom can be deadly even to people who are not allergic to insect stings. Their venom usually causes renal damage, which leads to death.

According to specialists, the optimum period to catch Asian giant hornets is between July and October. At this point, the colonies have been established, and the workers go out looking for food. It may be difficult to catch queens, but placing the trap as early as April may greatly improve your chances. Use a combination of the following measures to protect your bees from Asian hornets:

The first step is for the beekeeper and anyone else who sees the enormous hornets to alert agricultural officials. It is not advisable for you to remove it on your own. Remember that if you see a solitary hornet, it almost certainly signifies that a colony of killers is nearby. Identifying their colonies is beneficial in eradication attempts against Asian giant hornets.

A bait trap put within the beehive can aid in the capture of the Asian giant hornet. You should build it on top of the hive and allow the bees to escape easily, but not the enormous hornet. Alternatively, you can use a solution of millet jelly, fruit essence, raw sugar, vinegar or an intoxicant to attract giant hornets. 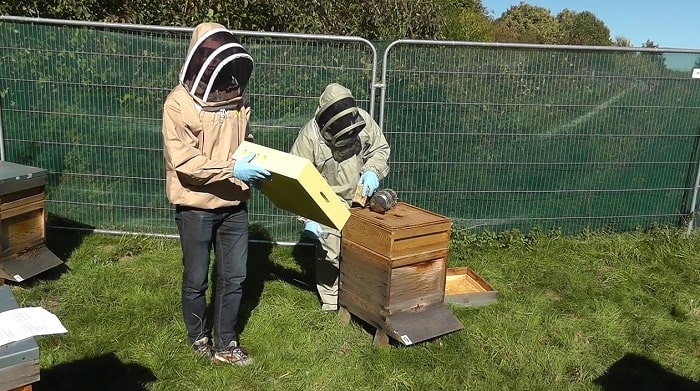 Asian hornet traps are available for purchase. It is known as the ApiProtect. It is a low-cost, non-toxic solution that effectively traps insects. Tests carried out in France and neighboring territories were successful.

It is simple to set up and utilize. You should set traps on specific parts of the hive early before the hornets attack. To keep birds and rain away from the board, you will need to provide an elevated cover. You should check the odorless trap regularly and remove it as soon as it is full of Asian wasps.

This method comprises striking the huge Asian hornets with flat-headed wooden sticks. You should use it when the wasps are in the hunting or slaughtering phase. They will not attack during their most vulnerable period. This procedure, however, is time consuming, inefficient, and risky.

You can kill the Asian giant wasps by eliminating their nests. You can poison or burn their nests. The difficulty would be identifying a nest in the first place. These killers can fly up to 8 kilometers away from their nest, making it very impossible to find their breeding spot. That is why it is critical to notify agricultural officials if you spot any of these insects.

The fact that Asian giant hornets constitute a major threat to the honey bee’s survival. However, we should not panic at this time, but rather use appropriate ways to deal with the problem at hand. Fortunately, a combination of the above-mentioned precautionary measures will aid in the eradication of the deadly giant hornets.