Knowing how to split a beehive is an important ability for any beekeeper to have. Swarming occurs when colonies become overcrowded. The beekeeper does not lose bees to a swarm by correctly separating a hive. This is also a wonderful technique to increase the size of your hive. However, if done incorrectly or at the wrong time, hive splits can result in the destruction of both colonies.

What is a beehive split?

As the name implies, a split literally splits one colony into two. By taking a strong, vibrant colony you create two. It is crucial to note that when we divide a hive, we are not just splitting the bees. We are dividing the bee colony’s resources.

Many inexperienced beekeepers struggle with this. Each new hive will require honey, pollen, and bee brood. In addition to such resources, they require a sufficient number of adult worker bees to carry out hive responsibilities. Most crucially, each half must have a queen honey bee or the resources to produce one. Include a frame with fresh eggs and larvae that are almost too small to see. It is also beneficial to have some capped brood to provide many fresh nursing bees. 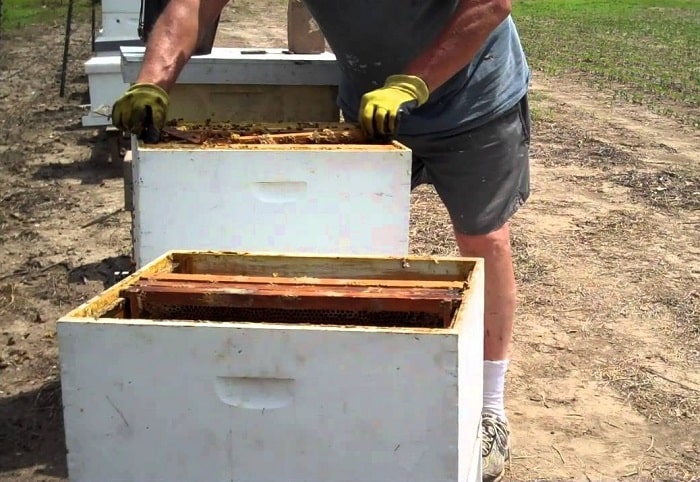 Why would you split a beehive?

Why take the risk when the procedure is not without risk? A beekeeper may want to separate beehives for a variety of reasons.

One of the most popular motivations for hive splits is to capitalize on the bee colony’s spring build-up. The beekeeper can have extra beehives by dividing large, vigorous hives. Creating new colonies in bee yards is a good approach to compensate for winter losses. Effective hive splitting is a method of increasing hive population without purchasing replacement honey bees.

Another reason to consider splitting is to avoid honey bee swarms. Some swarms can be avoided by minimizing hive crowding. If the colony divides into swarms and you catch it, that is fantastic! What if you do not? You have lost a swarm of bees. Swarming is a natural element of bee life and is beneficial to colony reproduction.

The resources required to develop a new queen must be available in this queenless split. Making a new queen is a dangerous endeavor that takes several weeks for the colony to complete. Make sure you have plenty of worker bees in your splits. The colony population will gradually decline until new bees emerge.

Some mite treatments work better when there is little or no brood. Beekeepers can timing hive splitting to help with mite management. The short disruption in the brood cycle interrupts varroa mite proliferation.

Best time to split a beehive

The best time to split a hive is in the spring. The honey bee colony is expanding rapidly at the moment. The “honey flow” period is a natural development period during which colonies are simpler to stimulate to thrive. The bees will remove congestion in the brood nest if you do not. You must act if you notice swarming cells during a mid-Spring hive examination.

While spring is a wonderful season to split, you may need to separate huge summer colonies as well. Splits can be used to manage swarming at any time during the warm months. You must, however, ensure that the smaller colonies have sufficient time to construct and prepare for winter. Wouldn’t it be fantastic if we knew exactly what our bees needed from us throughout the season?

How to split a hive without finding the queen?

We occasionally can not find our queen bees. That’s all right. It is difficult to find a single bee amid a colony of 40,000 stinging insects. Do not worry, you will not be able to make the split because of this. Divide the hive’s resources with caution. Again, make certain that each half has fresh eggs.

Return to the hive in 4 or 5 days and very carefully check for queen cell production. If you see queen cells, that is your queenless split. 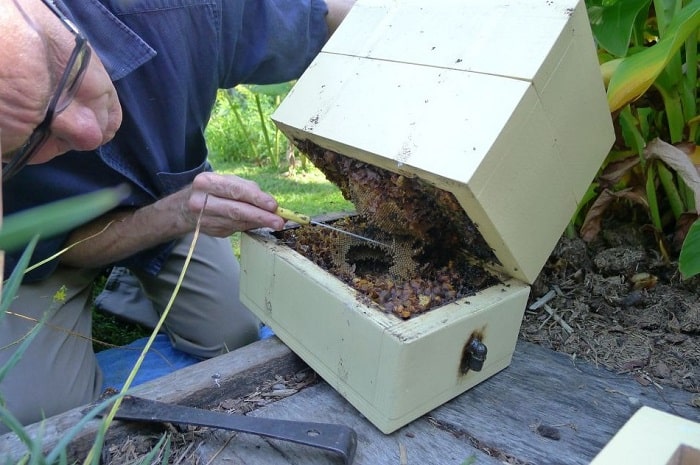 >>> Read more: How To Find The Queen Bee? All You Need To Know

How to split a beehive?

Set up a bottom board and a box near the first hive, ready to receive the split. To finish the hive, you will also need an inner cover and a top cover.

Take four or five frames of brood at various stages from the parent hive. You should, at the very least, ensure that both hives contain eggs or young larvae. There is one more thing to think about if you want the new hive to produce a queen.

Then, spread some nectar and pollen on some frames so that the new colony may go to work right away while also having something to eat.

Shake a few frames of bees from the mother colony into the new hive. Normally, 3-4 frames of shaking bees should suffice. However, make certain that you include young bees that can act as nurse bees. Also, be certain that you do not transfer the original queen!

How many splits from one beehive?

It may have occurred to you that you may have split the same hive many times. That is correct. While a single split is beneficial, some beekeepers split the same colony more than once every year. If you are successful, you will be able to rapidly expand your bee cosmos.

Splits can be made in a variety of ways, as with many other aspects of beekeeping. Find a method that works for you and tweak it until it is perfect. Even so, not everyone will be successful. You should be able to spot and rectify any evident faults if you monitor your new hives on a weekly basis.