Honeybee populations confront a slew of dangers in their hives. The wax moth is one of several pests that may harm bee hives. Wax moths are classified into two types: smaller wax moths and bigger wax moths. Both have similar techniques of wreaking havoc on a beehive. So, how to you get rid of wax moths in beehives?

What are Wax Moths?

Wax moths are insects that feed on the larvae of honeybees. They enter the hive via higher entrances and gaps on the hive’s exterior. Wax moths may fly in temperatures lower than those of bees. They mate and deposit their eggs at night. Wax moth larvae like a comb that has already been used by the brood and has held pollen. It is also worth noting that wax moth larvae may survive only on beeswax. As a result, they are a concern in honey supers as well.

The influence of climate, particularly temperature, on the lifecycle of wax moths is substantial. Female bigger wax moths may produce up to 800 eggs, whereas female smaller wax moths can lay up to 300 eggs. After a few days, the eggs hatch, and wax moth larvae emerge. At warm temperatures, the eggs hatch in 3-5 days. In cold temperatures, it might take up to a month for the eggs to hatch. The pupa wax moth subsequently molts into the adult stage. In warm regions, the pupa stage lasts 3-8 days. It might take up to two months in frigid climates. Adult wax moths mate, and the female lays eggs in a beehive to continue the cycle. 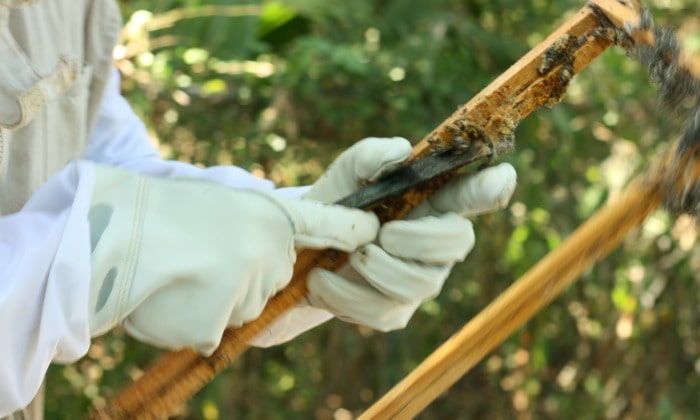 What are the effects of wax moths on beehives?

Wax moths deposit their eggs in crevices and fissures that bees cannot reach. They feed on beeswax and residual honey bee larvae cocoons. They also consume bee droppings and bee silk. Furthermore, wax moth larvae expel a sticky material from the comb that bees are unable to remove.

The sticky material secreted by the wax moth larvae traps adult bees in their cells. The bees are unable to escape their cells and perish. Worker bees subsequently remove these adult bees. This has the overall effect of reducing the number of mature bees in the honeybee colony. The larvae of the wax moth render bees’ brood comb useless. The moths reduce the overall number of the honeybee colony. The colony weakens and becomes vulnerable to additional pests, parasites, and predators.

How to get rid of wax moths in beehives

Freezing and burning are two effective methods for removing wax moths from your beehive once they have invaded it. Both techniques are effective and simple to implement. The eggs and larvae of wax moths cannot survive at extremely cold temperatures.

After freezing the frames, remove fecal debris and broken comb from the beehive frames using a knife. Remove any wax worms and webbing from the comb or frames using a pair of rubber gloves. Before reintroducing the brood frames into the beehive, you should examine it for additional infection. 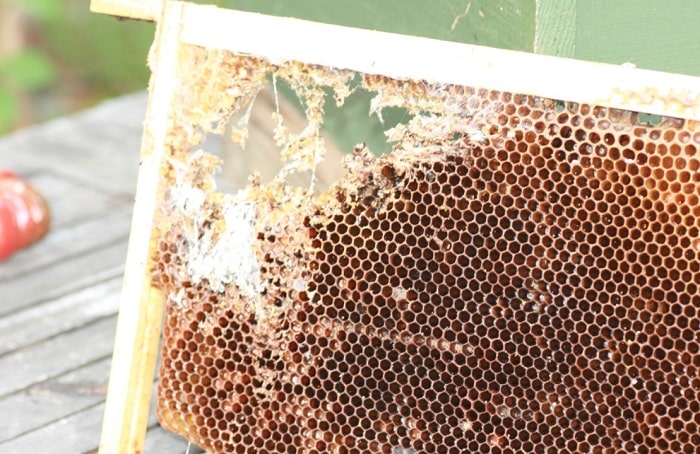 >>> Read more: How To Raise Bees For Honey – Things You Need To Know

How to prevent wax moths in beehives?

In a short length of time, wax moths can spread from one hive to the entire apiary. To keep wax moths at bay, beekeepers should employ one or a combination of techniques. These are some examples:

Wax moths are attracted to beehives with entrances and holes in the top portions. Wax moths are prevented from entering the hive by sealing higher openings. If you must have top entrances or ventilation openings on your beehive, make sure these are screened to keep wax moths out.

The trap imitates the scents of beehives, which attract wax moths. The moths then fall into the trap and drown. A wax moth trap can help protect beehives and honey supers from infestation.

Strong honeybee colonies easily combat wax moth infestations. As the wax moth enters the hive, they destroy it. In addition, they destroy and remove wax moth larvae from the hive.

The presence of foundation on frames that may be neglected and unprotected by bees exposes the honeycomb to wax moth larvae. Wax moth larvae have fewer honeycombs to inhabit in foundationless beehive frames.

Mint is repulsive to wax moths. Planting a few plants near your apiary’s beehives keeps moths away from the region and your beehives. To discourage wax moths, put some mint branches amid the beehive boxes. 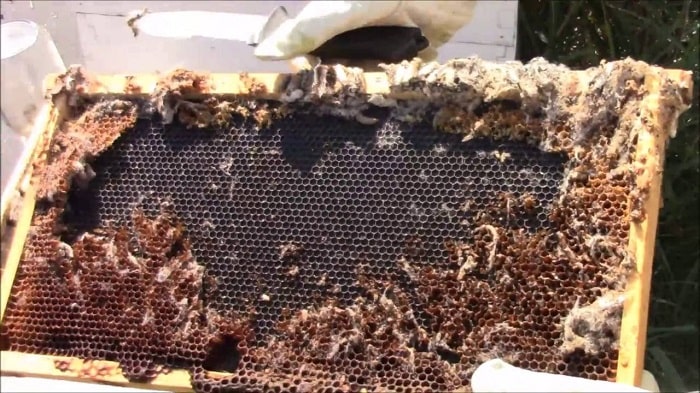 Wax moths may be drawn to honey supers that have been stored. This harms the comb housed in the supers as well as the wood used to construct the super boxes. In supers, freeze and apply a solution of Bacillus Thuringiensis (Bt), ParadiChloroBenzene crystals, or Para-Moth used to control wax moths.

Beekeepers can use paradichlorobenzene crystals to kill moths and their larvae. They hold the crystals in place in the superbox with a newspaper or other lightweight material. Before re-stowing the stored super canisters into your hive, you should air-dry them with Paradichlorobenzene.

Freezing honey super frames before final storage destroys wax moth eggs and larvae. The box can then be treated with a Bacillus Thuringiensis solution to prevent further infestation by wax moths. The larvae of wax moths are the most damaging stage, and eliminating larvae is sufficient to safeguard stored honey supers.

Para-Moth is a commercially available powder. You can put six teaspoons of Para-Moth solution between honeycomb boxes stacked on paper plates. Each stack should consist of five deep beehive boxes or six medium beehive boxes.You can use a tarp or other waterproof cover to cover the stack. After removing the beehive boxes from storage, you should air them out before using them.

Wax moths are a natural element of the honeybee ecosystem. Wax moths are excellent at cleaning up after bees in the wild. They consume wax from areas where bees have escaped. The same spot could later be occupied by a new colony. Wax moths, on the other hand, reduce colony strength and honey production in beekeeping. Beekeepers should take precautions to keep wax moths out of their apiaries.