A happy bee is a busy bee! When worker bees go foraging, they have one goal in mind: they want to eat! When nectar flows freely, honey bees are content. However, food can be difficult to come by at times. In these types of circumstances, bees may wind up robbing other colonies. And this can be a significant issue for weak colonies that are unable to protect themselves.

Robbing could be the worst thing that ever happened to one of your colonies. It is a good idea for a beekeeper to learn why this occurs and how to anticipate it in order to prevent it from occurring. So, how do you stop robbing bees?

What is hive robbing and why it occurs?

Robbing occurs when bees from one colony steal honey from another. Hungry bees are on the prowl for honey and nectar. However, if they can acquire access, bees will occasionally take syrup from feeders.

A stealing situation might develop quickly. When you open a hive for inspection, the odor of honey sends a message to adjacent hungry hives. And then you are soon engulfed by a swarm of buzzing visitors. It may begin with just a few bees, but the problem can quickly escalate into a robbing frenzy that must be dealt with immediately!

Strong hives are usually the ones who steal. Weak colonies are especially prone to robbery since they lack the numbers to resist a larger colony’s attack. The errant bees could be from your own hive or a neighboring nest. At other times, robbing may take place quietly. It is possible that you will not even notice. 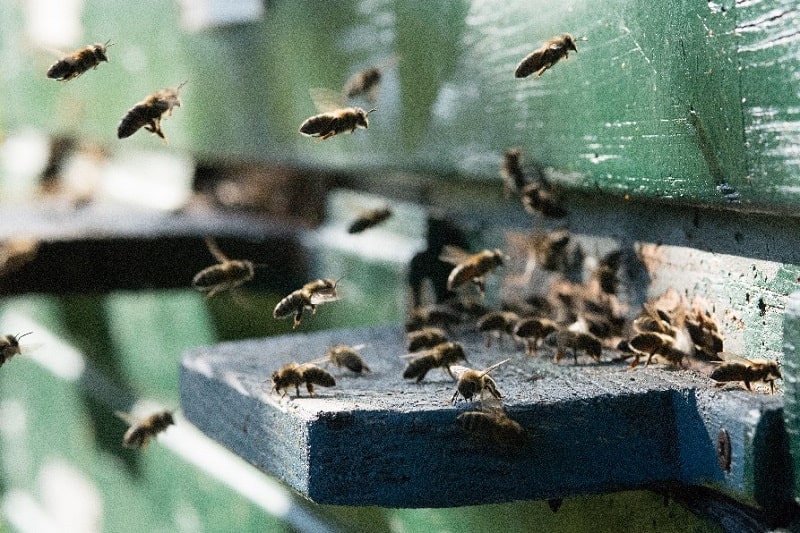 Will robbers kill the Queen Bee?

The defending colony will fight until the end. The frenzy continues until the bulk of the guard bees in the attacking hive are dead.

The robber bees may assassinate the queen bee. And we all know that a colony cannot survive long without a queen. Even if the invaded colony keeps its queen, it may not recover. With fewer workers and brood, the weakened colony may not be able to support the hive.

Normal activity at the entrance of the hive

It is late afternoon, or the morning following a rainy day. Hundreds of bees are buzzing around in front of your colony. Do not confuse heavy traffic at the hive entrance with a robbery. Is this a robbery of honey bees? Is it necessary to be concerned about all flying bees? No, not every group flight indicates the presence of robber bees.

Honey bees depart from the hive to eliminate trash. Young bees also take short flights outside the hive. This permits them to become acquainted with the hive’s location. They will take longer and longer flights as they get older.

This pastime is most typically performed on warm, bright days. My hives all seemed to be engaged in this activity at the same time. Orientation flights are frequently misunderstood by robberies. In the entryway, though, there was no fighting. Orientation flights usually come to a halt after 10 – 15 minutes. Honey bee robbery might last for hours or days.

How to identify robber bees

If you have robber bees, there will be a true frenzy of activity that will last for at least 10 minutes. There will also be bees fighting at the entrance to the hive, and possibly falling to the ground as well.

When robbing occurs, the attacking bees will try to enter any available opening. They will be looking for cracks between the boxes and trying to get in through the top.

When there is a dearth of natural nectar, bee robbing behavior intensifies. This is referred to as a “nectar dearth.”

Scarcity can be generated for a variety of environmental reasons. Nectar might be lost as a result of a late-Spring freeze. Drought is one of the most common reasons for a lack of nectar for all pollinators. During the long, hot summers in my area, there is often a scarcity.

When honey bee robbing is a problem, some beekeepers utilize robbing screens. Any honey bee robber screen’s fundamental design allows bees to come and exit from the hive at a slower rate. This prevents a swarm of invading bees from entering the hive in considerable numbers.

Robbing screens are available in a variety of forms. Some are designed in such a way that you can totally close the hive. This is useful when moving a beehive from one site to another. You can also create your own robbing screens. The basic idea is to relocate the gateway leading to the hive entrance. 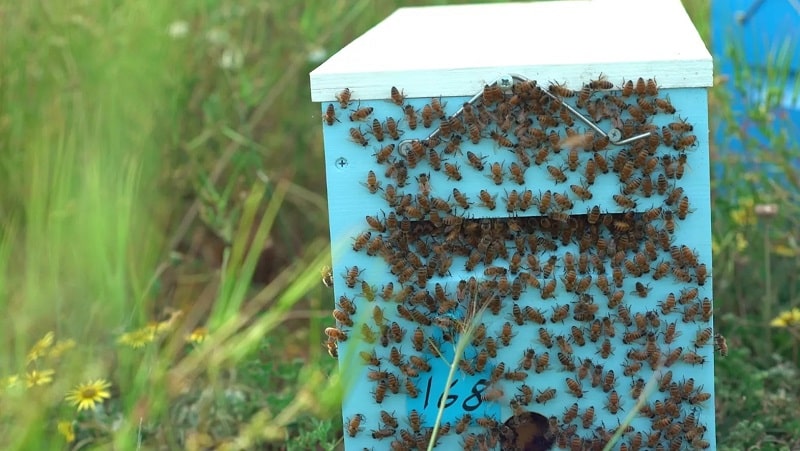 How to stop robbing bees

You can narrow the hive entrance with pieces of wood, grass, or screen. Such shields may not need to be expensive, but they must be useful and effective. A smaller entryway is easier to keep secure. Fill in any gaps or excess holes between the boxes. You just want one little entrance to the hive until things calm down.

The majority of us do not have this option. As a result, we must be extremely cautious to retain modest entrances on these little hives or splits. Furthermore, avoiding a robbery is easier than stopping one.

A popular beekeeper approach is to use a wet cloth to stop robbing. Hanging a wet bath towel over the front of the hive (in front of the entrance) that is being robbed deters entering robber bees. The resident bees discover a way to enter the hive by crawling beneath the towel. The majority of the attackers will hover in front of the hive.

The sprinkler method is another method I’ve used with some effectiveness to shut down honey bee raiding behavior. To pour down on the victim’s hive, a water sprinkler with a waterfall setting is utilized. Robbers are forced to return home as a result of this.

Honey bee robbing behavior is a natural process in the never-ending battle for survival. In most cases, it may help the hives with the strongest genetics survive.

You can keep the hives much closer together than they would be in nature. Use good beekeeping practices, such as keeping the bee yard clean, to help reduce robbing in your yard.